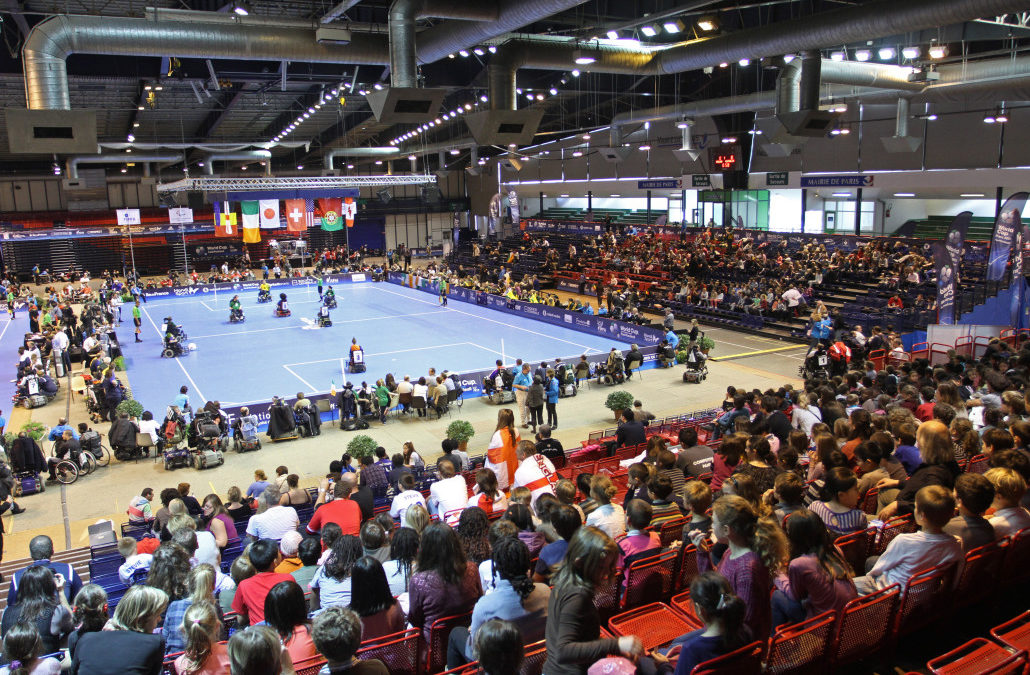 An English powerchair football coach and referee Steven Crump is very enthusiastic. If you take his word for it, no-one using a powerchair should ignore powerchair football. The excitement of the world’s fastest-growing sport is worth joining, seeing and having a go.

Inspiring and enthusiastic Steven Crump got to know powerchair football about eight years ago when he began to work with disabled athletes in West Bromwich. Today, he coaches one of the four teams in West Bromwich, but he sees himself also as an advocate of the sport in Europe.

The experience he has is well worth sharing since powerchair football in England has developed to the top level. In Finland, the sport has been practised a bit longer than three years now, whereas in England they have played for about ten years already. There are now about 2500 players in England whereas in Finland, there are a couple of dozen so far.

According to Steven Crump, the present form of powerchair football started in France in the late 80s. Europe and the United States first developed slightly different versions of the game. Actually, the universal laws did not become established until the early 2000s.

Come and see and have a go!

Steven points out that the game has a lot to offer to spectators, as well as giving the the players the opportunity to be a part of the football movement.
– After all, football is such a HUGE thing in the world, and powerchair football is currently the world’s fastest growing sport. I hope we will soon see it in the Paralympic Games as well, he says.
– The more players, the better for all, Steven says. – Skills develop through practice, so the level should not be raised too high when one is only just starting.

Equipment is a must!

So, powerchair football is a sport only for powerchair users. The equipment – the chair and the footguard – play a big role, of course, in the run of the game.
– Globally, you can see a lot of variation in the equipment being used, Steven describes. – In Finland, the players use primarily the chairs meant for playing powerchair hockey. In England the players mainly use the type of Invacare Storm chairs that are especially designed for powerchair football, as the company itself has been heavily involved in the development of the game and equipment.

According to Steven, currently the most advanced chair for this sport is a Strike Force made by Power Soccer Shop. In this chair, particular attention has been paid to, for instance, safety.

However, you don’t need a particular type of powerchair to start off, because a plastic footguard can be fitted on most chairs, and then you have a chance to try it out. The sport chairs have, however, been tuned to accelerate faster than everyday chairs.

Skill and enthusiasm in Finland

Steven Crump was invited to Finland by the Powerchair Football Finland Association. The training camp in January was run by Steven and the Finnish coach Erik Lundell.

– The Finnish team is young, so there is still a lot to learn. Here, however, there’s enthusiasm and skill, too. I’ve known the Finnish team fore more than a year now and I can say that the progress has been huge!
Above all, Steven praises the Finnish footballers’ eagerness to learn and get better. He also praises the troops in the background, meaning the parents and other adults in coaching, maintenance and development.
– Those responsible, coach Erik and chairman Marita Tiri are leading the way; they have done a great job in developing the Finnish powerchair football.

Team Finland has already participated in as many as two international tournaments, the Paris tournament in 2013 and the successful tournament for new countries in Vienna in the autumn of 2014. The next time the players can measure how their skills have developed at the beginning of August, this time in Denmark, which hosts the European Champions Cup in 2015.

After the weekend camp in January Alex Lundell and Kalle Hänninen, two players with lots of experience, crystalised how everyone felt: – A good weekend. We go ahead with victory in mind!