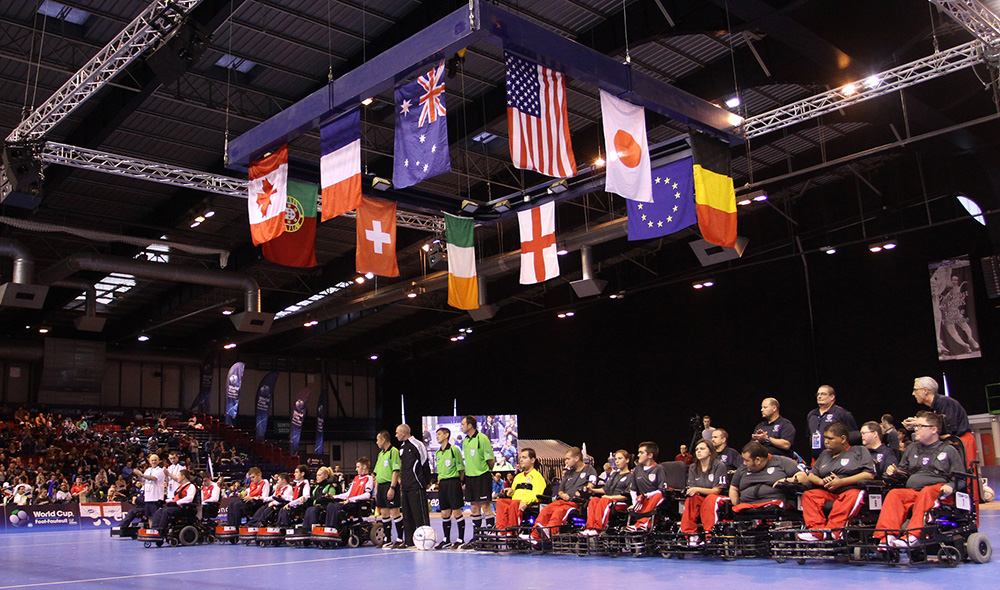 With the EPFA Nations Cup taking place next July in Ireland, the FA England powerchair side are beginning to prepare themselves for this World Cup Qualifying event.
The coaching team led by Head Coach Colin Gordon and assisted by Steve Pearson have decided that the best way to prepare for this event will be to host three training camps over the coming months. The first of these is to be held in January at the new home of English Football, St. George’s Park.

Following a strong start to the WFA National League season, the coaching team had a tough task of selecting a mixture of PF1’s and PF2’s (Powerchair Football classifications for players) to make up the training squad for the next camp. The coaches were very complimentary of a large number of National League players and would like to encourage every player within the Premiership and Championship divisions to keep working hard over the coming months as the final squad for Ireland won’t be named for several months.

Adam Crowle, Team Logistics Manager said “Selecting this squad was a real headache for the all the coaching team as the standard of play this season has been brilliant so far. The involvement of classification has proven very tricky and meant it limited the chances of some player but that’s how the game works at the top level”

The tough challenges the coaching team have had in picking the squad is down to the hard work of all involved with the National League teams and shows how the sport continues to develop and players are improving.

Matt Francis, who has secured a recall to the squad following a great start to the season commented “I am over the moon to be called back and cannot wait to return to St George’s Park. I learnt so much at my first training camp and I hope to keep improving my game as everyone is working hard to try and make the team that will head to Ireland for the Nations Cup.”

There are two new faces in the squad as Mike Coleman and Cath McNicol have been selected for their first experiences with the National Team. Cath said “I am absolutely delighted to be called up for the England squad. I am lucky to have started the season well with Northern Thunder and been scoring some goals, so hopefully I can keep my form going and perform well at the training camp.”
The WFA would like to congratulate the players for being asked to attend the training camp in January. We wish them all the very best and hope their preparations for Ireland go smoothly and that they can gain qualification for the FIPFA 2015 World Cup.

If there are any questions relating to the FA Powerchair Team, please contact their Team Logistics Manager, Adam Crowle (adam.crowle@albionfoundation.co.uk)